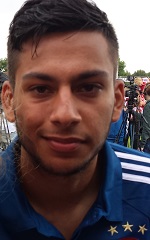 Ricardo Kishna kept up the tradition that many of Ajax' players score during their eredivisie debut by scoring during his substitute turn during the home game against AZ on February 23, 2014. Earlier the same season Jairo Riedewald scores as well during his debut.